Basic paper on the environmental impact of mountain biking

The environmental impact of mountain biking was the focus of the third German Mountain Bike Tourism Congress "Our NATURE" in Winterberg in 2017. In 2018, we have deepened this work and summarized the state of global research in the basic paper "How soil, flora and fauna react to mountain bikers - an overview of the state of research".

Here you can download the research paper as PDF.

How Soil, Flora and Fauna React To Mountain Bikers

Nevertheless, it is important to be aware of the following environmental impacts:

All paths have consequences.

The most serious impact of trail-related activities in the recreational area is first of all the creation of the trail. For the fauna, especially reptiles, even narrow paths can be partly insurmountable barriers. They cut up habitats and make intermixing more difficult or, in the worst case, lead to the isolation of populations.

The animal's respond to the mountain biker is much shorter compared to the slower hiker. An escape reaction occurs in 60 percent of encounters when hiking, and in only six percent of encounters when mountain biking. Mountain bikers are more predictable because they are limited to trails. Hikers, on the other hand, often approach outside of existing trails. It is here that wildlife feel the greatest stress. Assuming regular repetition in the same place and the absence of direct consequences for wildlife, animals become accustomed to the disruptive stimuli.

Even comparativeley short disturbances have consequences.

For example, animals experience reduced food intake and increased locomotion. Depending on the season and the animal's state of health, disturbances can have serious consequences, especially at dusk. In Central Europe, roe deer are adapting to recreational pressures. This is noticeable as an increased shift of activities into the night, but also in smaller foraging areas in highly frequented recreational areas. Forest roads or even entire regions are avoided, so that an ever-increasing fragmentation of the natural area by trails also has consequences.

Whether cycling, jogging or Nordic walking, the rhythms of recreational use, especially of meadows and forests close to settlements, have changed. Contributing factors include a shorter workweek and greater interest in outdoor recreation, as well as milder winters and the widespread availability of high-quality functional clothing.

As a result, mountain biking - like the other recreational activities mentioned - is now a year-round activity, even if the number of active people is still significantly lower during the colder months of the year. From October to March, recreational sports in the Central European are naturally practiced after work in the twilight or darkness. 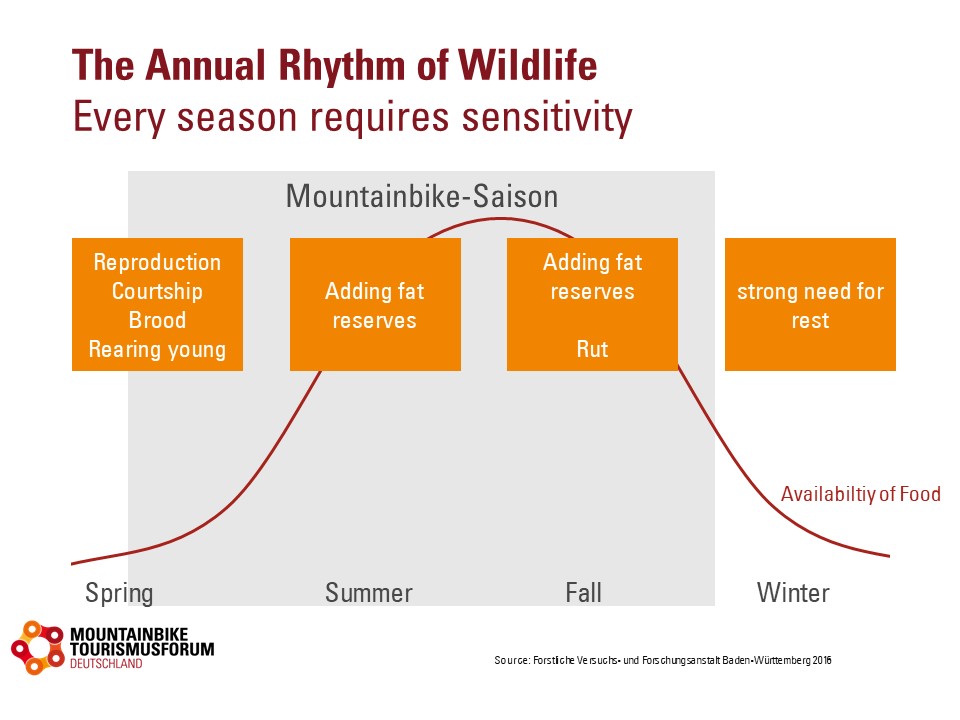 At the same time, wild animals are particularly susceptible to disturbances during the cooler months of the year. The food supply decreases and the need for rest is particularly strong.

Therefore nature activities at dusk and night should always be viewed critically and avoided if possible. Night runs and rides should be avoided, especially in sensitive areas. A uniform position and associated recommendation supported by both sports and nature conservation associations would be desirable.

Mountain biking is a trail-based sport.

Mountain biking is a trail-based sport.
Mountain bikers depend on trails to practice their sport. The construction of a trail has the strongest influence on the soil and the biodiversity there. Informal trail networks have a particularly strong impact on wildlife. They bring disturbance to previously undisturbed areas and are unpredictable precisely because of their comparatively sporadic use. In contrast to established trails, they are thus significantly more dangerous from the perspective of wildlife.

Mountain bikers and hikers have similar motivations and demands for recreational and natural space.

Many nature sports enthusiasts have similar motivations for their desire for outdoor exercise. For 96 percent of mountain bikers, enjoyment of nature is the main motive for engaging in the outdoor activity (MTD 2018). The requirements for natural spaces are also similar. Both user groups look for trails that are as natural as possible, different ground structures, and ideally a designated trail network with an organized guidance system for easier orientation.

What does this mean for the future?

The problem of informal trail networks should be addressed proactively by all sides. Round tables have proven to be a suitable forum to work out a balance of the needs of nature conservation, active mountain bikers and other stakeholders. Given the ever-growing target group of nature sports enthusiasts - in addition to mountain biking, hiking and other active sports are becoming increasingly popular - and an accompanying increase in pressure on nature, sustainable and forward-looking approaches to raising awareness and guiding users are imperative.

Do you have questions about the environmental impact of mountain biking? You deal with the topic in your region or do research? We look forward to your questions and the exchange. Get in touch with us.

Stay informed with monthly updates on industry trends, regional developments, projects and guidelines around the topic of biking and bike tourism. 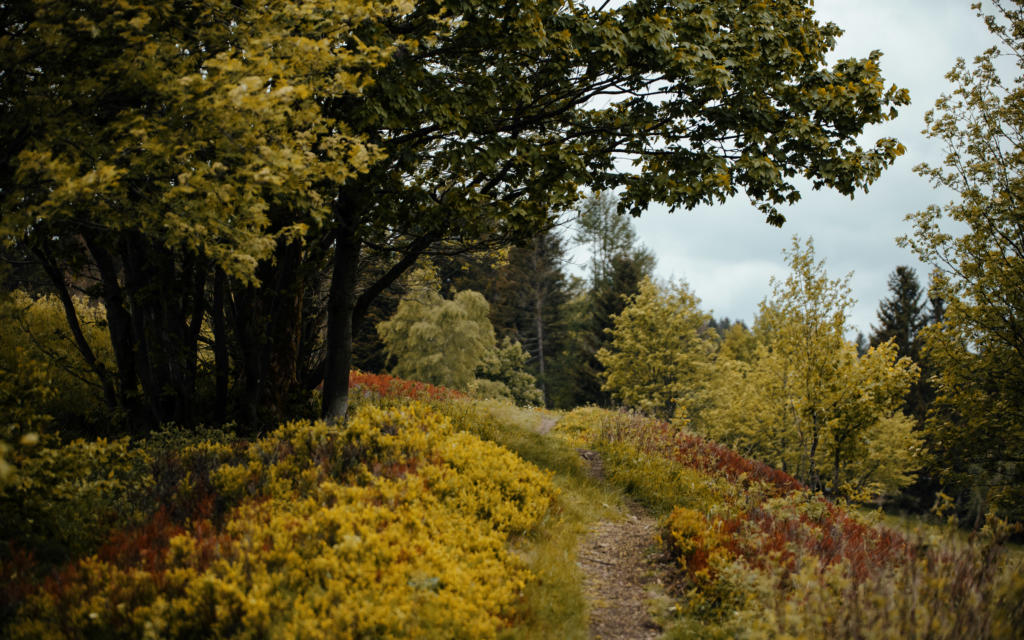 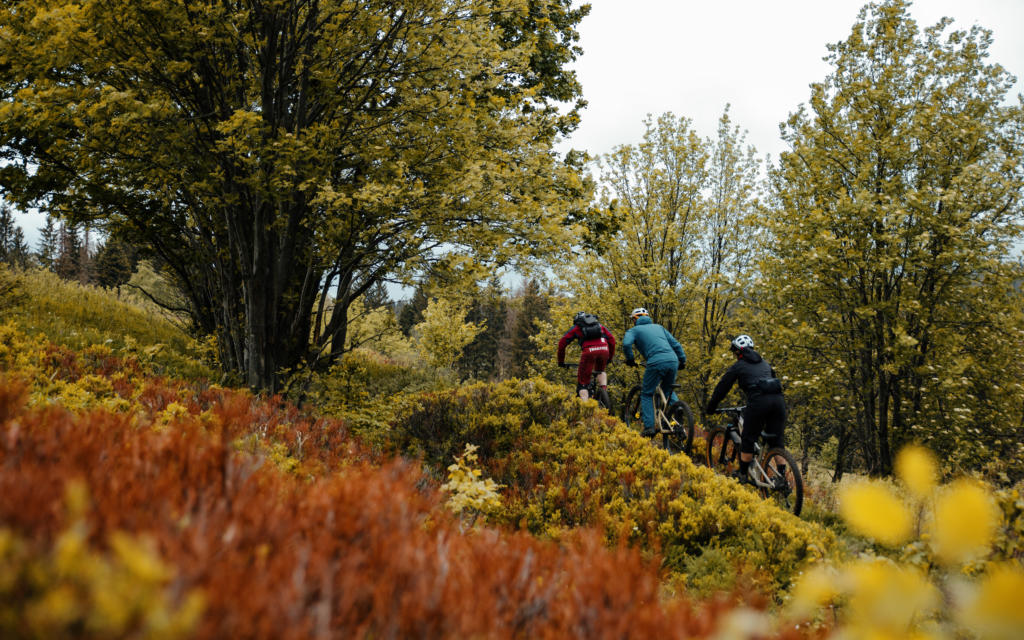 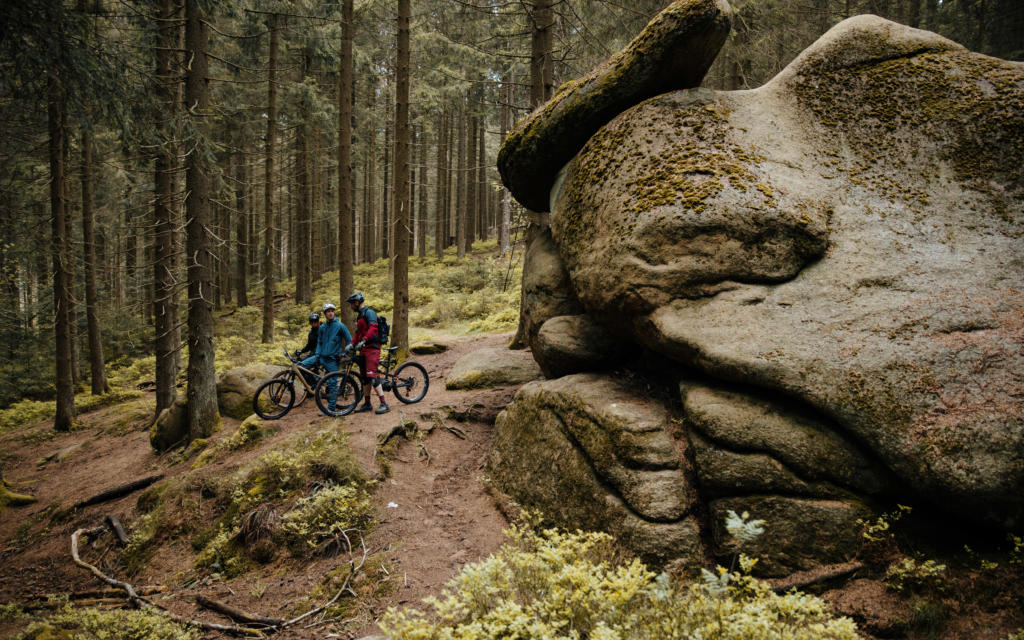